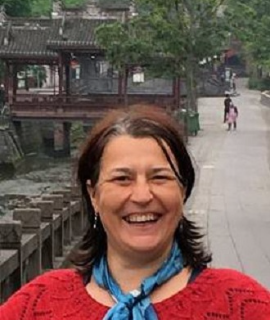 Bogyo Erzsebet
Be Fit For Ever Ltd, Hungary

Bogyó Erzsébet studied English at Kossuth Lajos University, Debrecen, Hungary and graduated in 1989. Since 2002 she studied qigong and tai chi from several masters in Hungary and England. She also studied martial arts for three years between 2004 - 2007 learning this aspect of qigong as well. She started teaching qigong for free in 2007, then in 2009 started doing her own workshops. In Hungary she studied Alternative medicine, then went on to study Alternative Movement and Massage Therapies, getting her certificate in 2018, which is recognised in Hungary to help people with qigong, joga, 5 Tibetan movements and also with massage techniques. In 2018 she studied from Master Mantak Chia in Thailand and in the same year she studied qigong healing in China for a month. In 2019 she spent altogether 4 month in China to deepen her overall qigong knowledge in China. In January 2020 she spent a month in India in an ashram near Arunachala mountains deepening her qigong and meditation techniques that improve one’s health

Title : How to improve your overall well being with simple, yet highly effective qigong exercises